TrAU! is a TWF-funded project investigating the relation between trust, autonomy and understanding.

That intellectual autonomy is a desirable thing, something to admire in others and to nurture and cultivate in ourselves, is broadly assumed as true. We should “use our own reason”, as Immanuel Kant famously claimed. But what does it mean? What does an autonomous subject look like? And what is the role of autonomy in a world in which competence and expertise are allocated unequally among subjects? 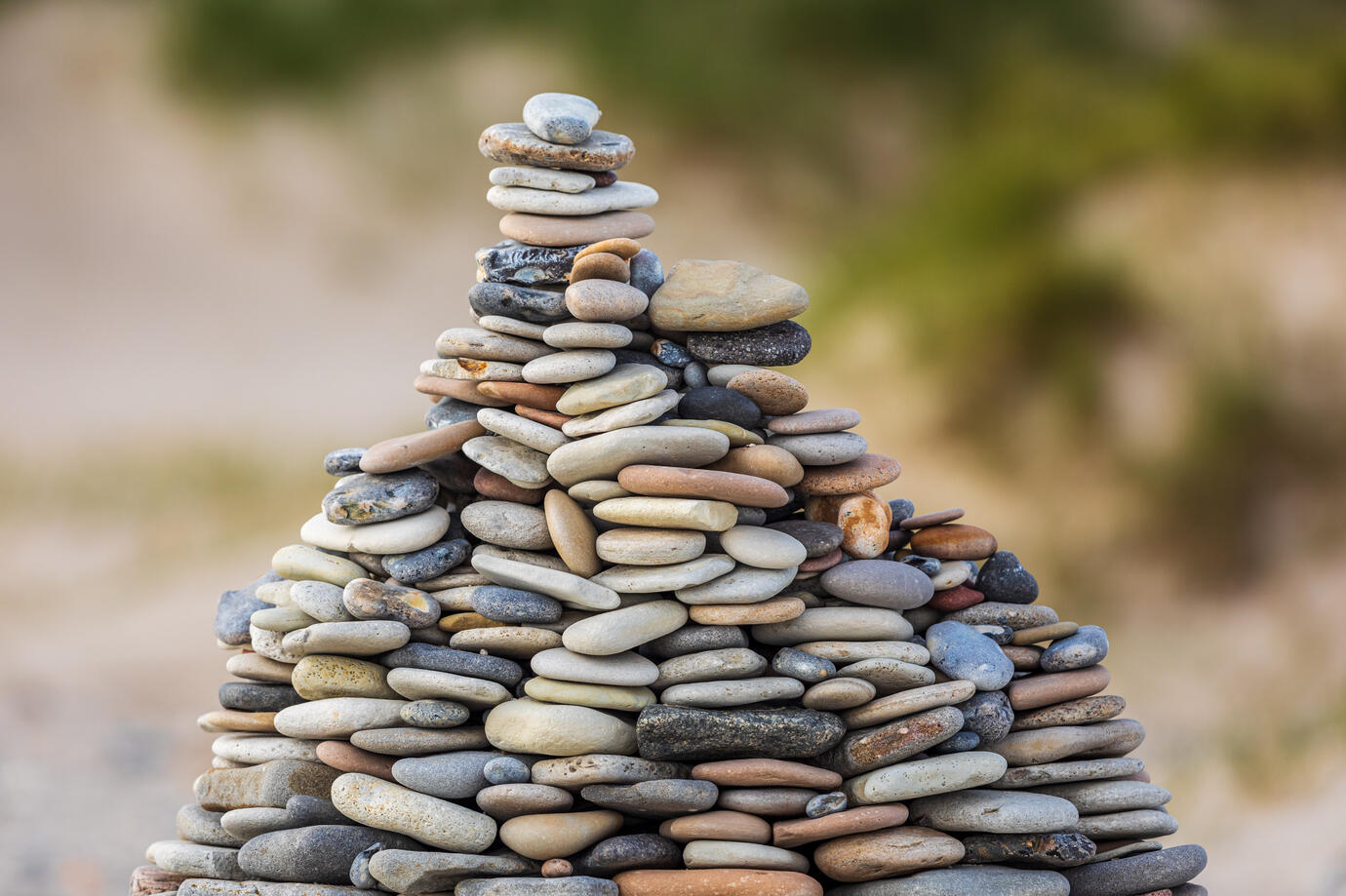 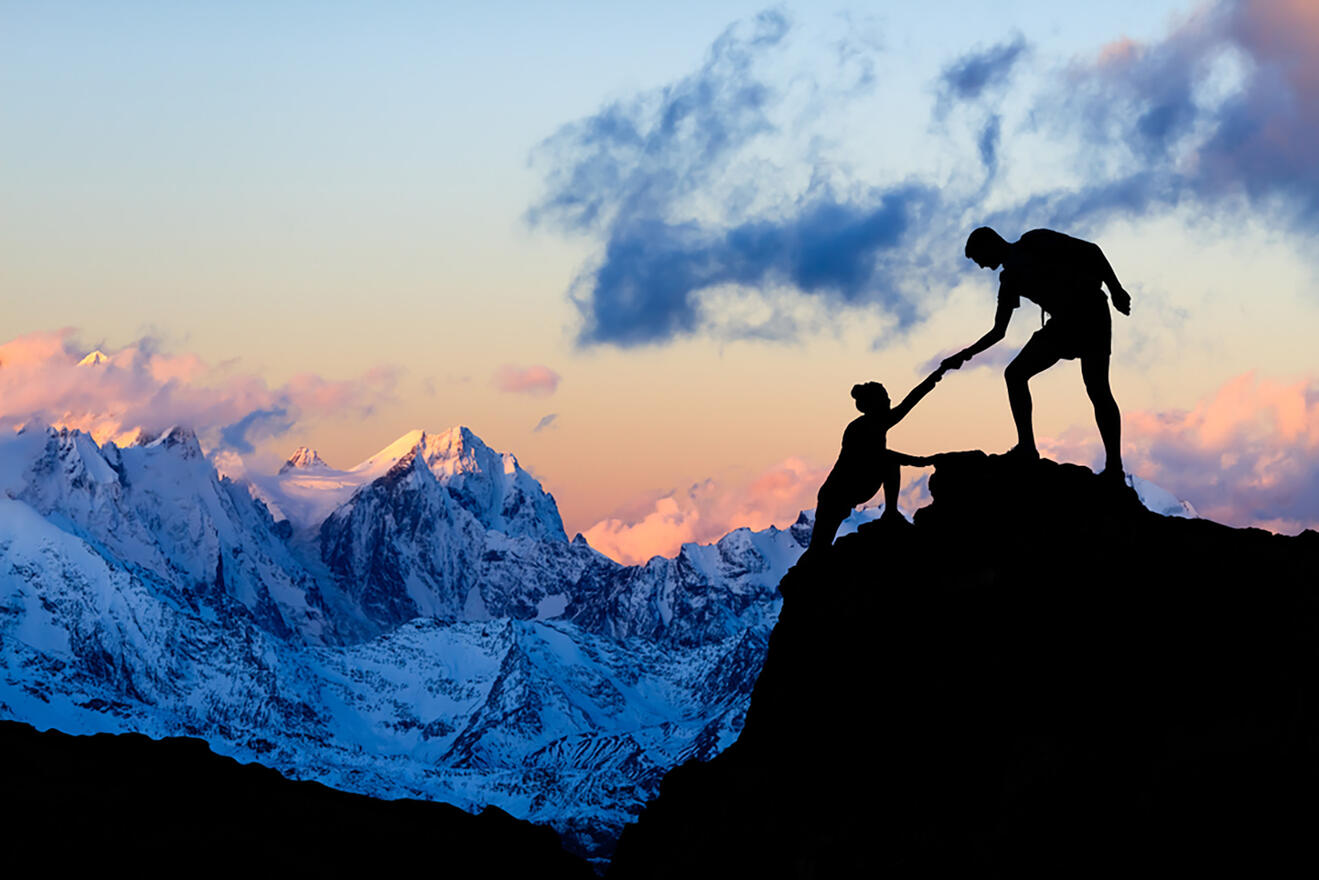 Moreover, is intellectual autonomy always a good thing, or are there risks connected to its exercise? If there are, are these risks worth taking? These are the questions that the TrAU! project aims to address. 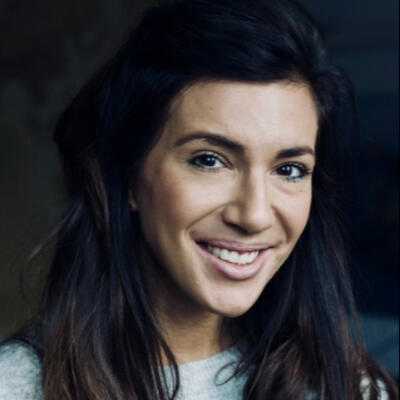 Federica Malfatti is a postdoctoral researcher at the University of Innsbruck. Her research interests lie at the intersection between epistemology and philosophy of science. She has a forthcoming book on understanding, and she has published multiple papers on the social aspects of understanding and on the question whether and how understanding can be acquired on the basis of the testimony of others.

Katherine Dormandy is professor of philosophy at the University of Innsbruck. One major focus of her research is epistemology and its applications in social settings. Central topics include epistemic authority, religious and worldview disagreement, the epistemological import of first-person narratives, and the role of interpersonal trust. 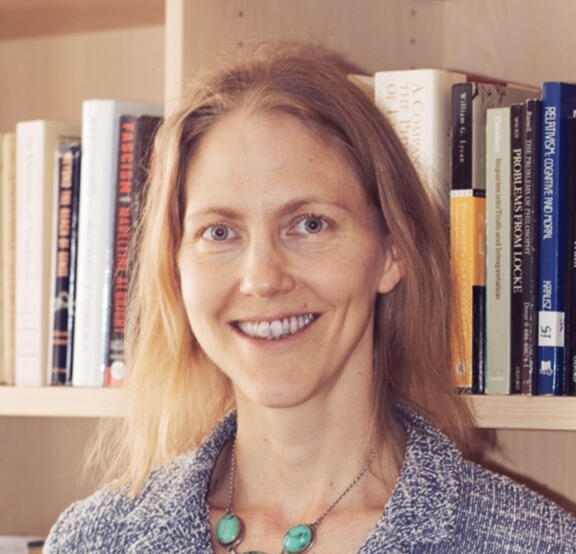 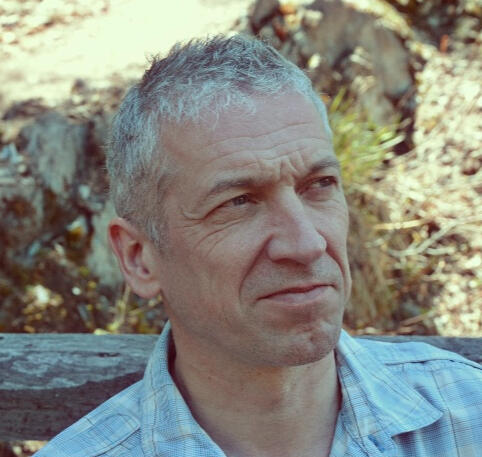 Christoph Jäger is professor of philosophy at the University of Innsbruck and Guardini Professor at the Humboldt University of Berlin. His research interests include epistemology, social epistemology, aesthetics and the philosophy of religion. He has published many highly influential papers on the notion of epistemic authority and on normative issues in epistemology.

Georg Stadler is in the process of finishing his Bachelor's degree in Philosophy at the University of Innsbruck. He also brings some valuable skills to the table, due to his experience as a freelance media producer and personal development coach. Public relations, photo/video and event organization are his main duties at TrAU!. 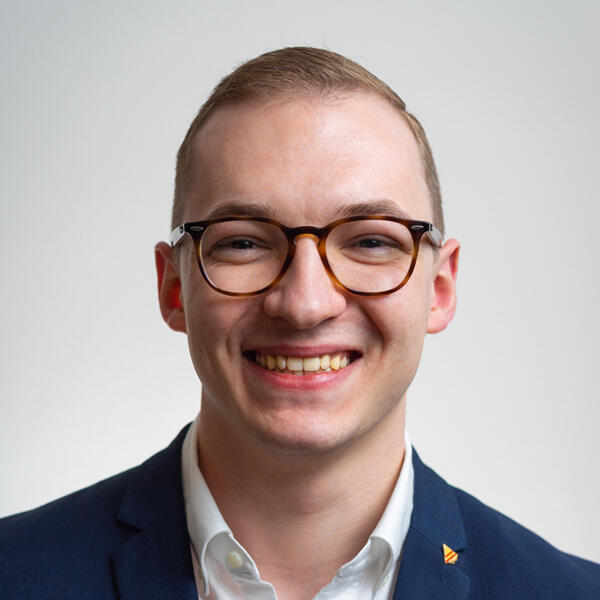 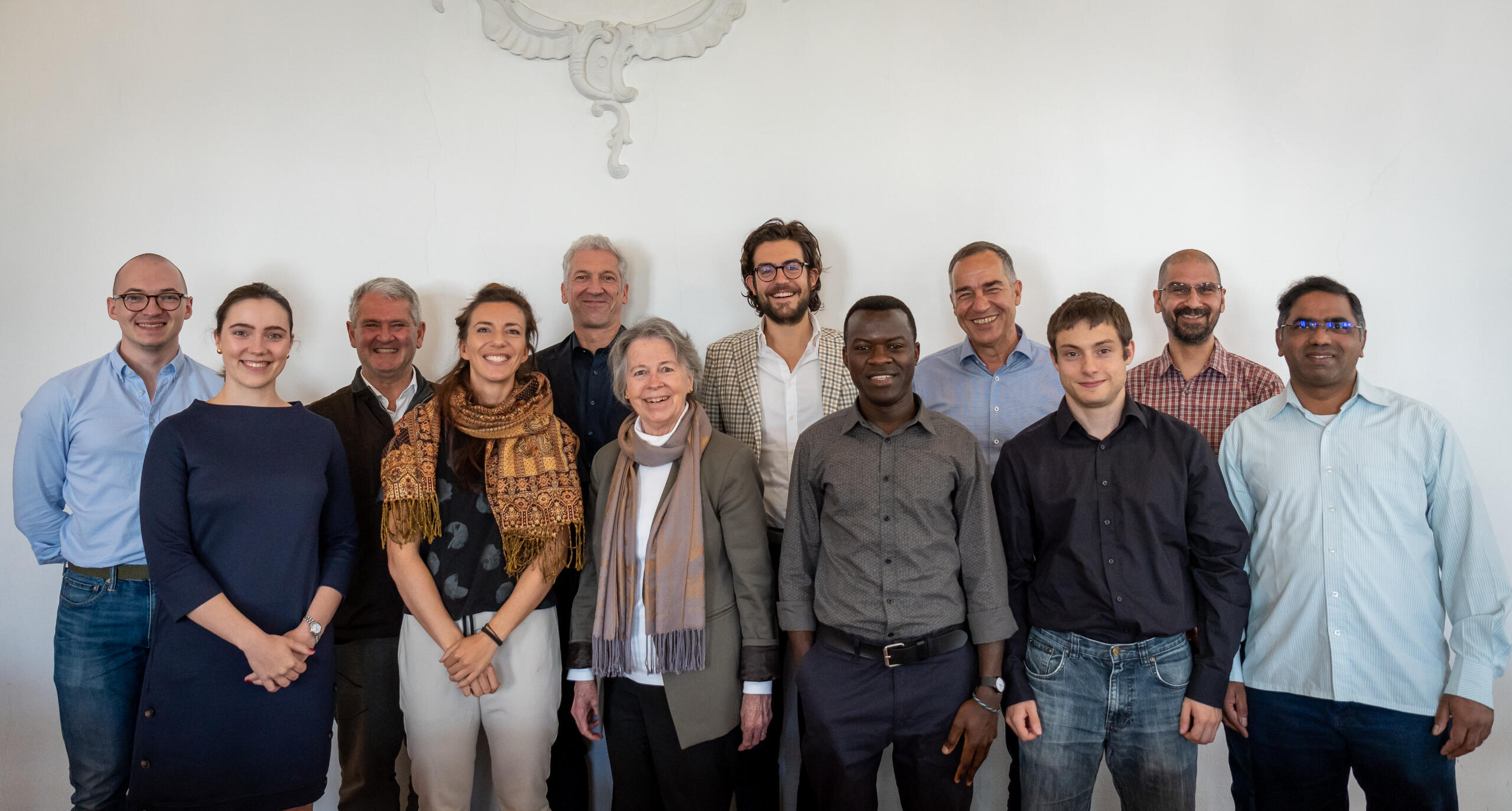 That intellectual autonomy is a desirable thing, something to admire in others and to nurture and cultivate in ourselves, is broadly assumed as true. We should “use our own reason”, as Immanuel Kant famously claimed. But what does it mean? How does an intellectually autonomous subject look like? The intellectually autonomous subject is not completely intellectually independent and self-reliant. We live and thrive intellectually in communities in which there is a division of epistemic labor, and in which competence and expertise are allocated unequally among subjects. But then, what is the role of autonomy in a world in which we have no choice but to rely on experts and epistemic authorities to achieve our epistemic goals? Can a subject be intellectually autonomous, while relying on others and while trusting others for the achievement of intellectual goods – such as truth, knowledge, and understanding?An international spectrum of philosophers addressed and discussed these topics. Early career scholars served as commentators. This allowed for a horizontal knowledge transfer on all levels of experience and fostered the general discussion as our first international event within the TWF-funded TrAU! project. 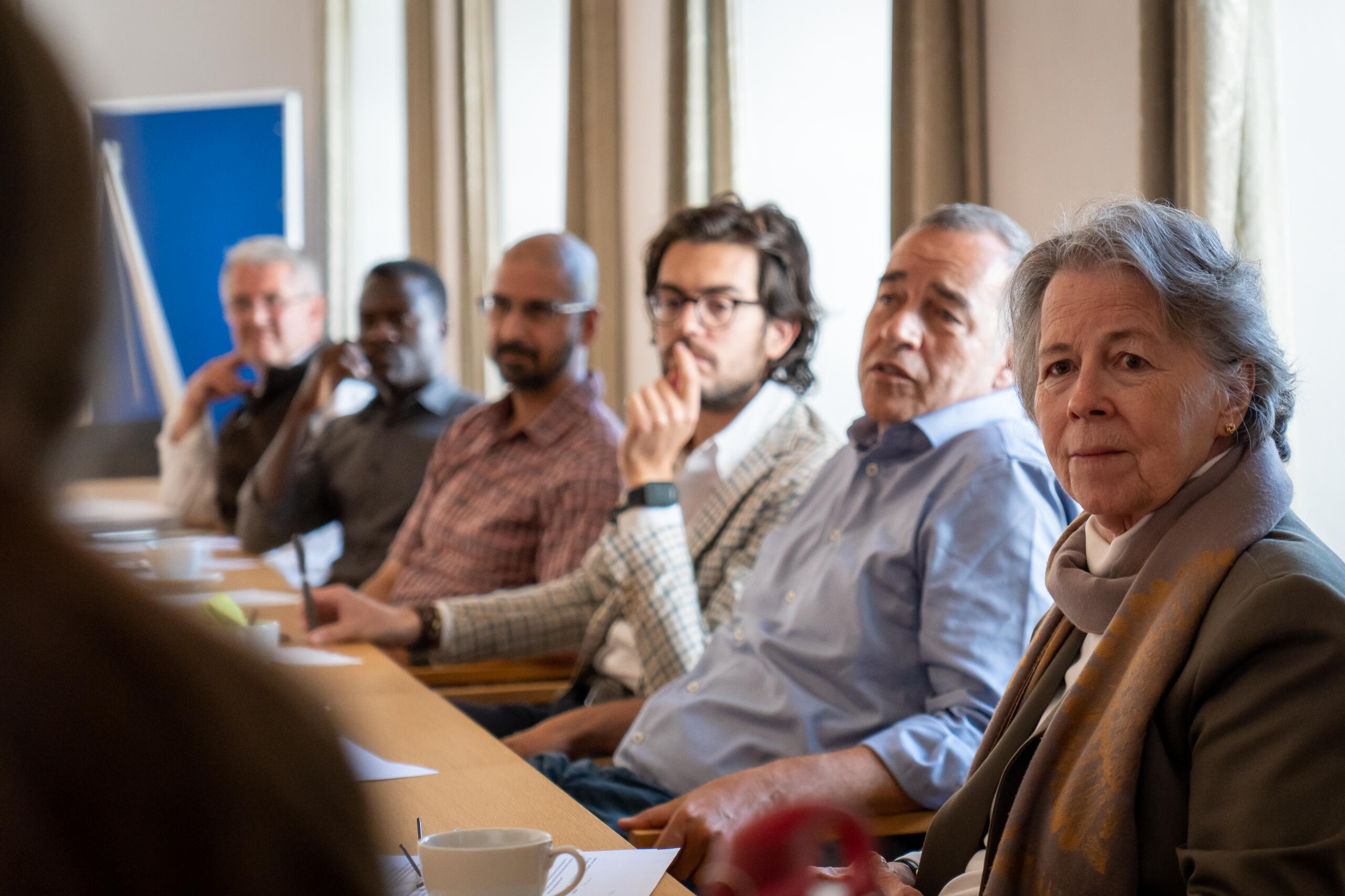 Here we try to list our relevant research and findings in relation to the TrAU! project. This overview will be updated regularly, so be sure to come back again later! 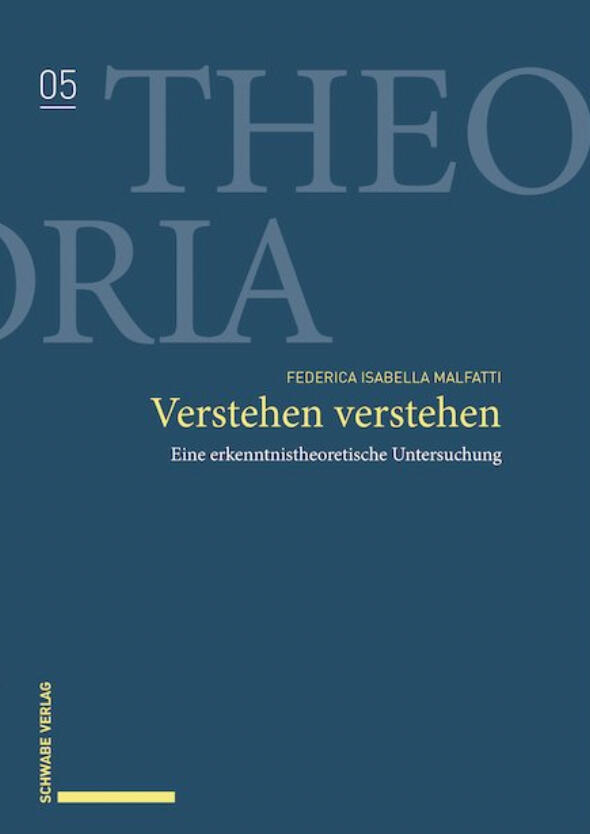 Do We Deserve Credit for Everything We Understand?

Malfatti, F. I. forthcoming. Do We Deserve Credit for Everything We Understand? Episteme.

It is widely acknowledged in the literature in social epistemology that knowledge has a social dimension: we are epistemically dependent upon one another for most of what we know. Our knowledge can be, and very often is, grounded on the epistemic achievement of somebody else. But what about epistemic aims other than knowledge? What about understanding? Prominent authors argue that understanding is not social in the same way in which knowledge is. Others can put us in the position to understand, but when we understand something, this accomplishment is to be credited mainly if not entirely to us, as it is due to the successful exercise of our own cognitive abilities. In this paper, I show that the social dimension of understanding closely resembles the social dimension of knowledge. I distinguish between three different ways in which a subject can depend upon another subject for (either the acquisition or the possession of) a certain epistemic good. I then argue that all these kinds of epistemic dependence apply to knowledge and understanding alike. If I am right, understanding is not (always) an achievement to be (mainly) credited to the single epistemic agent who understands. 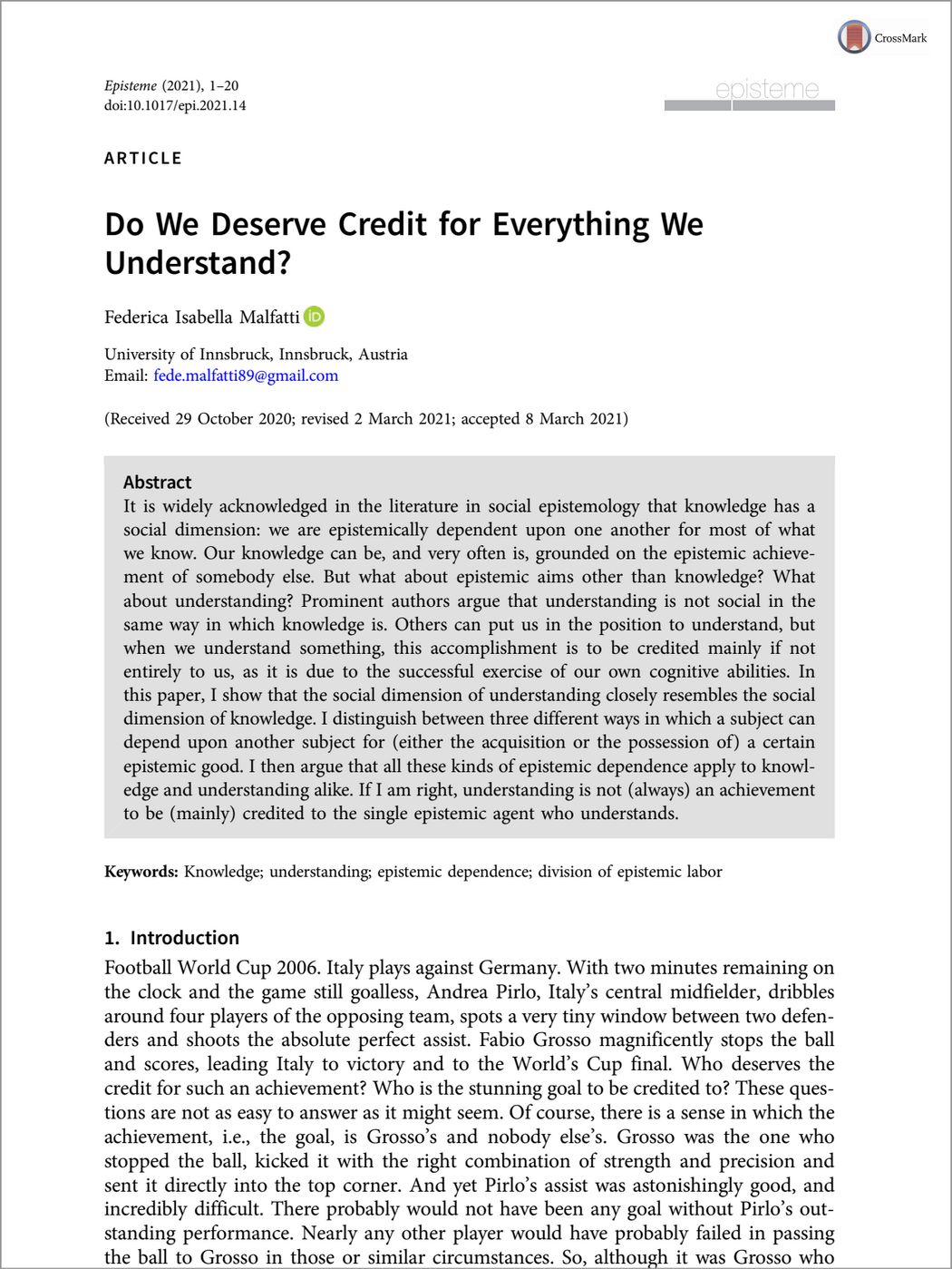 Understanding Phenomena: From Social to Collective? 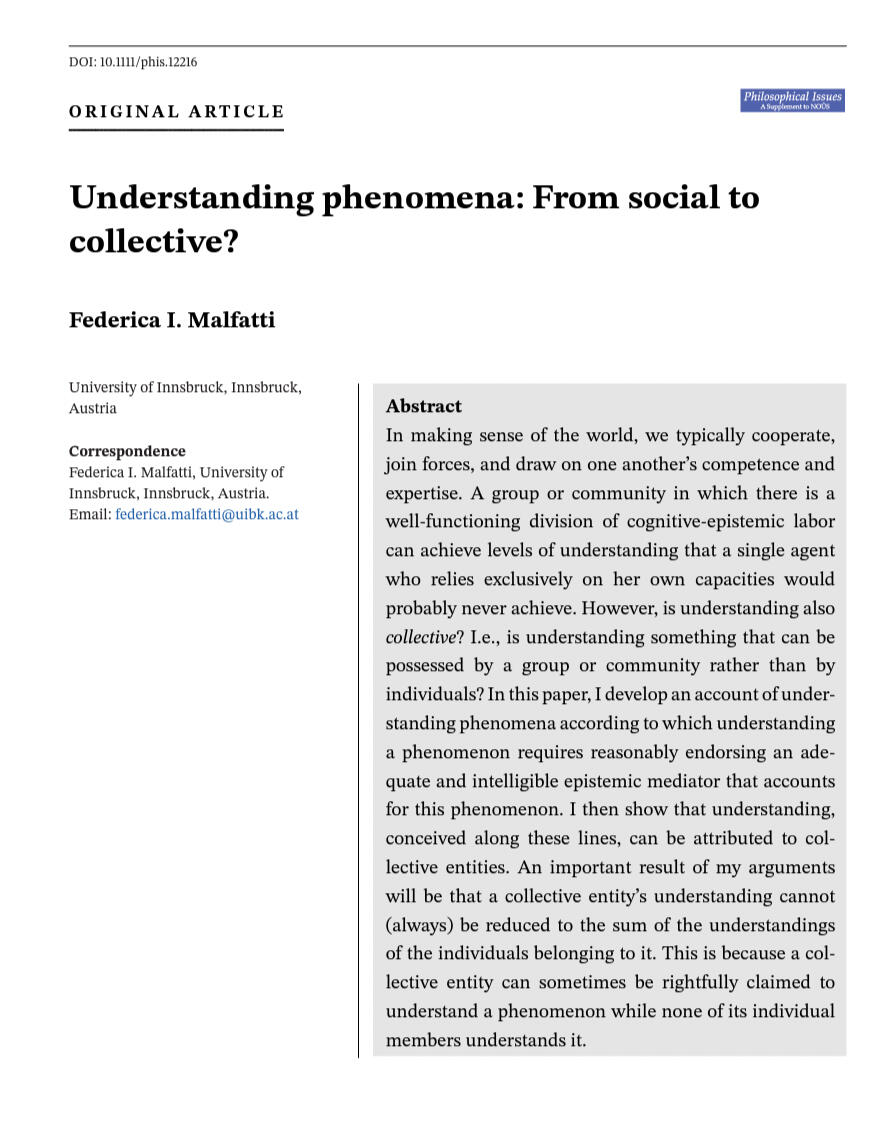 Loving truly: An epistemic approach to the doxastic norms of love

If you love someone, is it good to believe better of her than epistemic norms allow? The partiality view says that it is: love, on this view, issues norms of belief that clash with epistemic norms. The partiality view is supposedly supported by an analogy between beliefs and actions, by the phenomenology of love, and by the idea that love commits us to the loved one’s good character. I argue that the partiality view is false, and defend what I call the epistemic view. On the epistemic view, love also issues norms of belief. But these say simply (and perhaps surprisingly) that you should adhere to epistemic norms in forming and maintaining beliefs about loved ones. I offer two arguments for the epistemic view. The first appeals to the emotional responses of love, which, when sensitive to what the loved one is really like, can make love great and be morally transformative. The second is a new argument for why caring for a loved one requires true beliefs about him. We see that there may be some boundaries, such as stuffy traditions, that love is right to defy, but that epistemic boundaries are not among them. 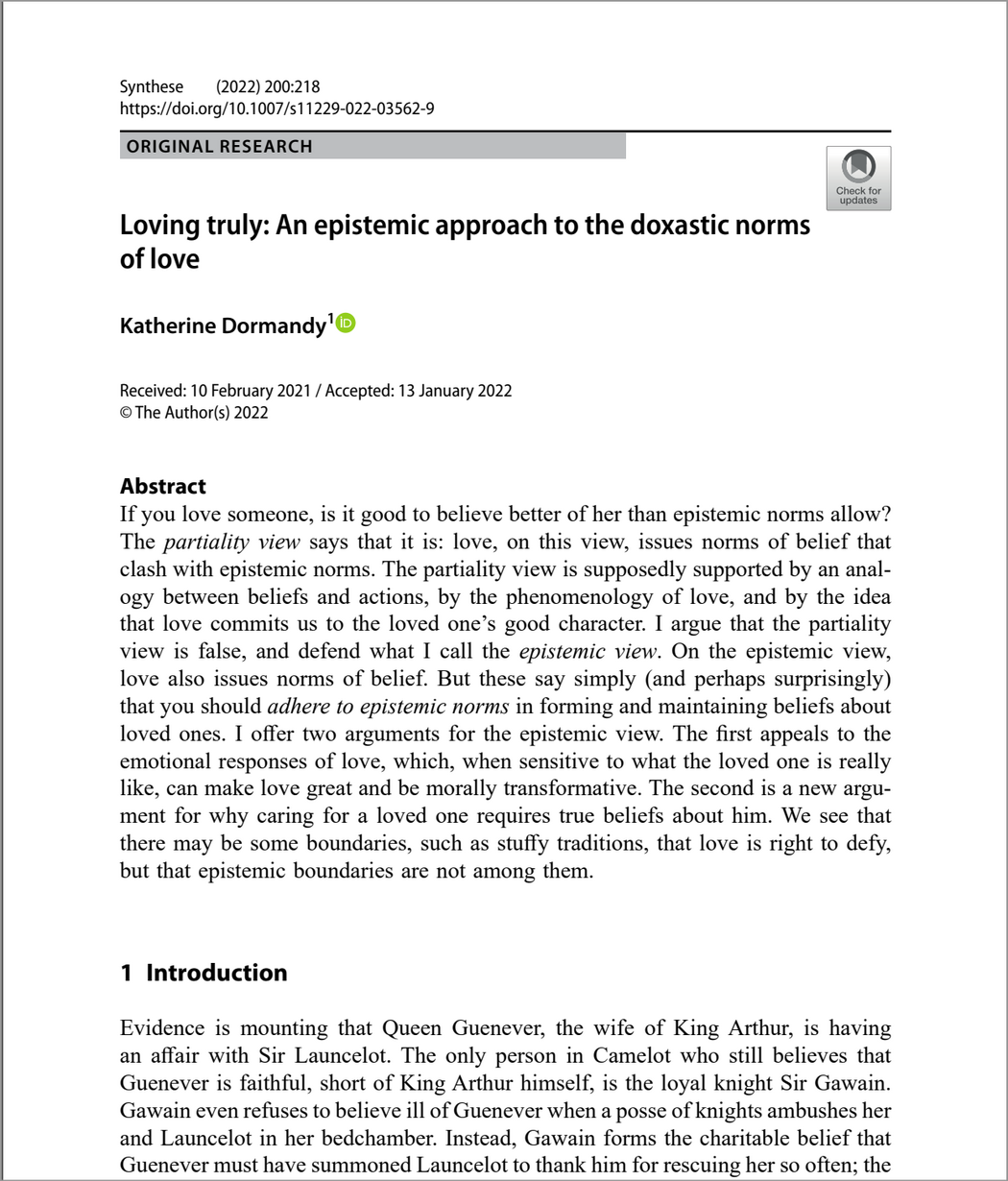 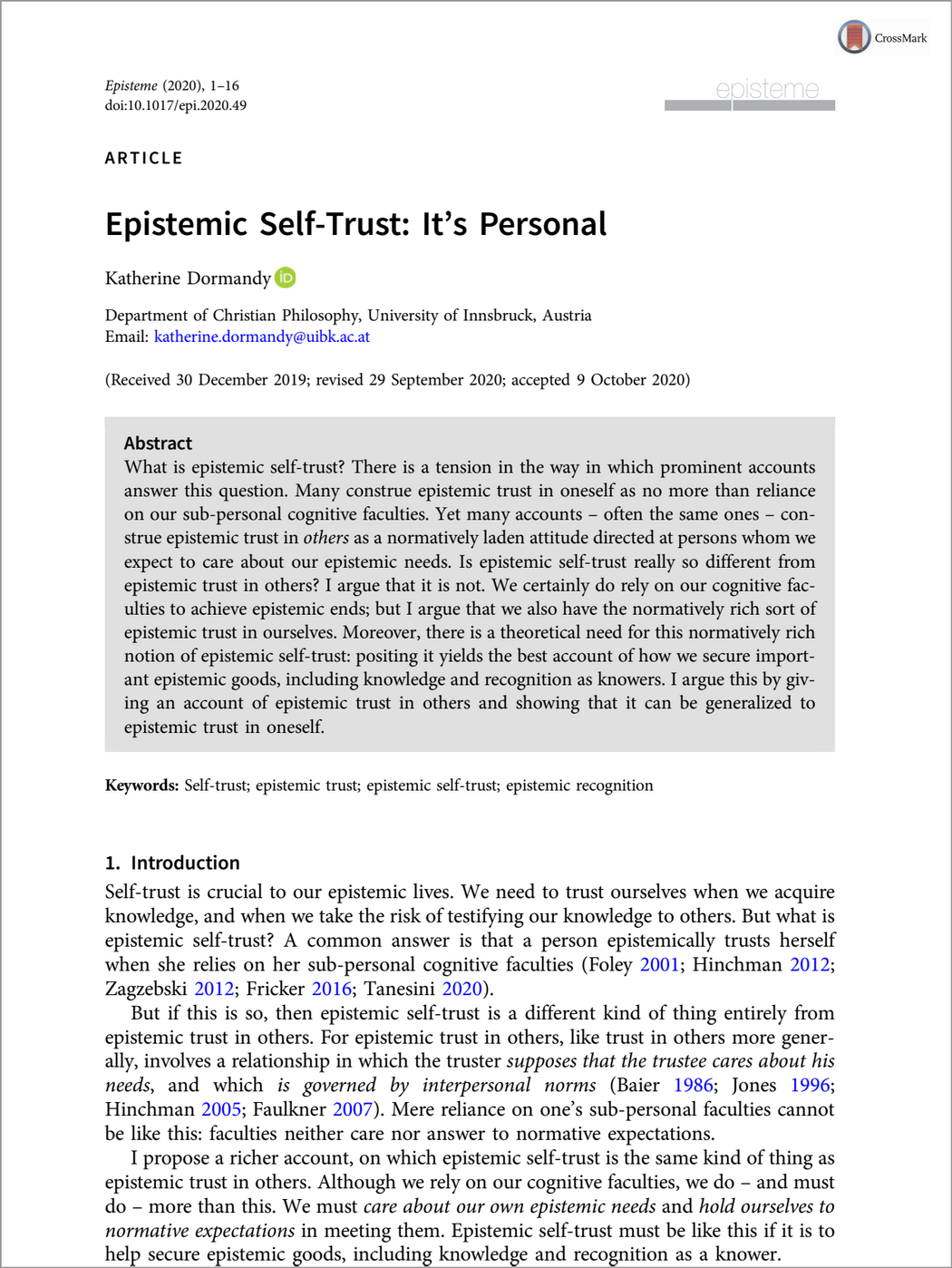 The Social Fabric of Understanding: Equilibrium, Authority, and Epistemic Empathy 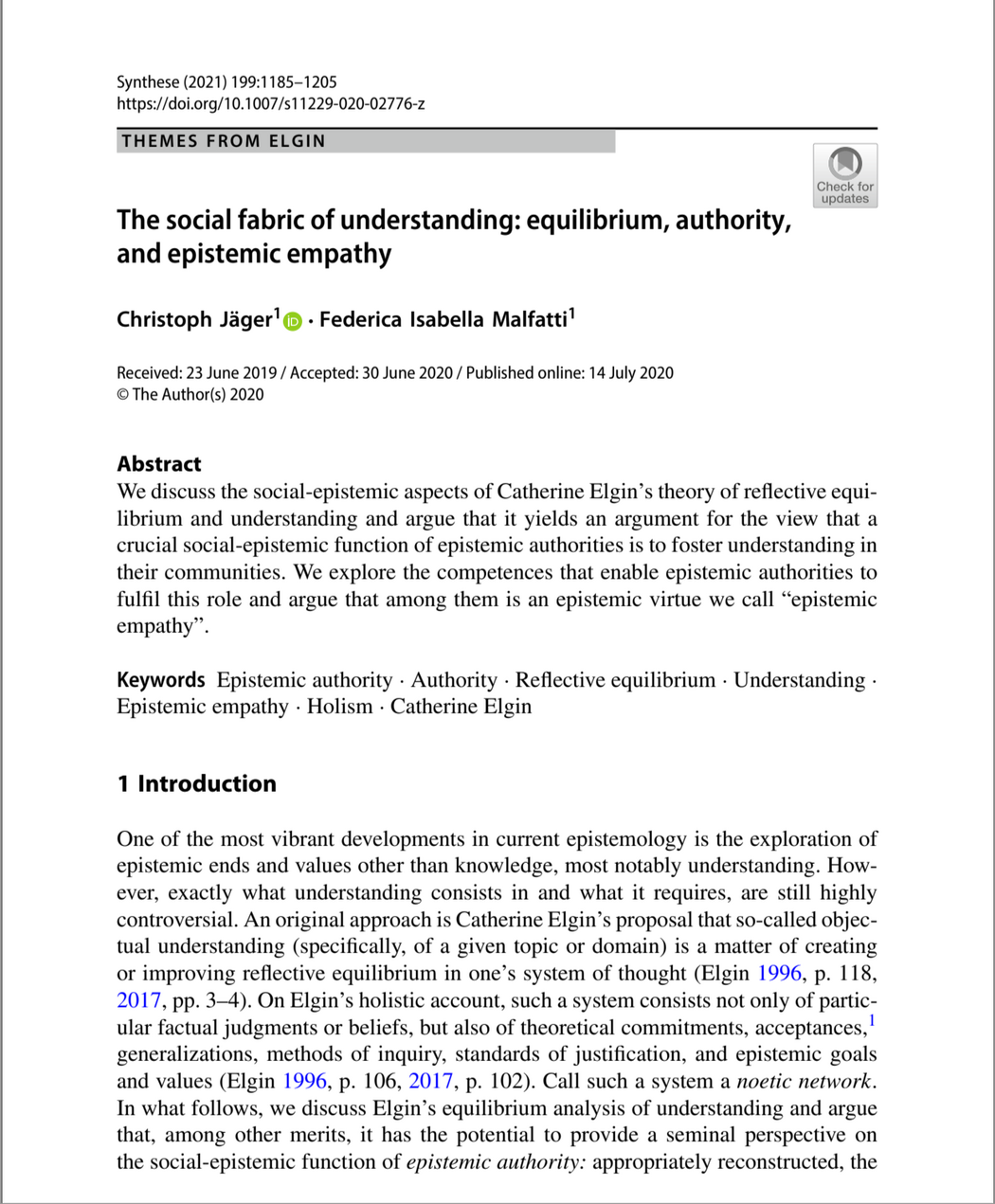 On Understanding and Testimony

Testimony spreads information. It is also commonly agreed that it can transfer knowledge. Whether it can work as an epistemic source of understanding is a matter of dispute. However, testimony certainly plays a pivotal role in the proliferation of understanding in the epistemic community. But how exactly do we learn, and how do we make advancements in understanding on the basis of one another’s words? And what can we do to maximize the probability that the process of acquiring understanding from one another succeeds? These are very important questions in our current epistemological landscape, especially in light of the attention that has been paid to understanding as an epistemic achievement of purely epistemic value. Somewhat surprisingly, the recent literature in social epistemology does not offer much on the topic. The overarching aim of this paper is to provide a tentative model of understanding that goes in-depth enough to safely address the question of how understanding and testimony are related to one another. The hope is to contribute, in some measure, to the effort to understand understanding, and to explain two facts about our epistemic practices: (1) the fact that knowledge and understanding relate differently to testimony, and (2) the fact that some pieces of testimonial information are better than others for the sake of providing one with understanding and of yielding advancements in one’s epistemic standing. 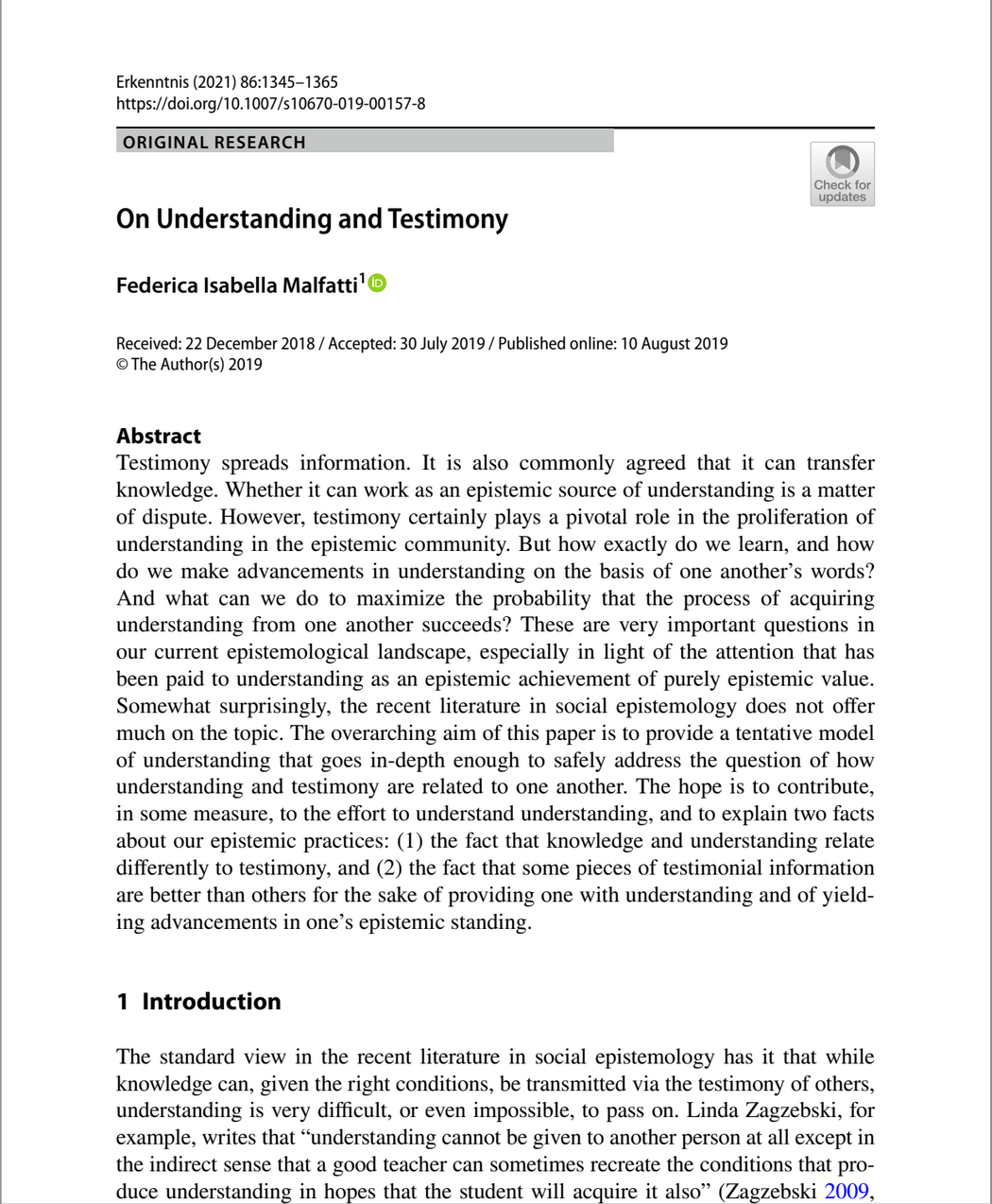 The TrAU! project is structured around three work packages called A, B and C.

Work package B is titled “Intellectual autonomy: its risks”. Trusting the word of others can, no doubt, be dangerous. It makes us vulnerable. But what about trusting (only or primarily) oneself? In what sense, if any, does intellectual autonomy make us vulnerable? We will tackle these questions from two different sides. First, we will explore the relation between understanding and the subjective feeling of understanding. The feeling of understanding, we will argue, is a seductive, but often unreliable indicator of genuine understanding. Second, we will explore the phenomenon known under the label of “meta-ignorance”.

Work package C is titled “Intellectual autonomy: its value”. Why is intellectual autonomy a desirable thing? What do we admire exactly about an intellectually autonomous subject? We would like to explore the hypothesis that what we admire about an autonomous subject is her successful intellectual agency – i.e., the fact that she is successful at achieving the intellectual goals she has set for herself, and that she is responsible for the design of her intellectual profile. The autonomous subject, we will argue, is able to make the absolute best out of the circumstances. She optimizes her resources. She takes everything her epistemic environment has to offer. She exercises her intelligence not to figure out everything by herself, but to track down and to identify trustworthy sources of information. This, we contend, is at least part of what it takes to be intellectually autonomous in a world in which a division of intellectual labor is necessary and competence and expertise are distributed unequally among subjects.

We will update you with relevant news and informations about our workshop and project development. No spam, we promise!